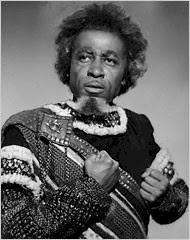 In 1953, baritone Robert McFerrin Sr. won the Metropolitan Opera national auditions. His 1955 debut with the Opera as Amonasro in “Aida” made him the first black man to perform with the company, and he sung in 10 operas over three seasons. He was the father of conductor-vocalist Bobby McFerrin.

He appeared just three weeks after contralto Marian Anderson made her historic debut as the first black to sing a principal role at the Met.

McFerrin provided the vocals for Sidney Poitier in the 1959 movie “Porgy and Bess.” He also sang with both of his children, Bobby and Brenda McFerrin.

In 1993, father and son appeared with the St. Louis Symphony — the older man as soloist, the younger as guest conductor. “His work influenced everything I do musically,” Bobby McFerrin told The Associated Press in 2003.

Robert McFerrin was born in Marianna, Ark., one of eight children of a strict Baptist minister who forbade his son to sing anything but gospel music. That changed when he moved to St. Louis in 1936 and a music teacher discovered and encouraged his talent. In the late 1940s and early ’50s, McFerrin sang on Broadway, performed with the National Negro Opera Company and the New York City Opera.

He moved back to St. Louis in 1973. He suffered a stroke in 1989, but his singing voice remained. In June 2003 he was honored by Opera America, the national services organization. He died in 2006. (info and photo from The New York Times)
Posted by Michael N. Marcus at 5:05 AM