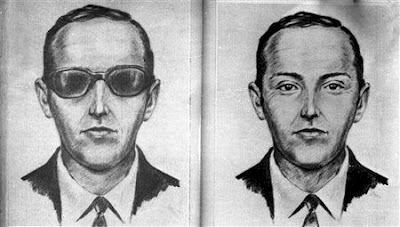 The FBI is making a new effort to identify mysterious skyjacker Dan Cooper, who bailed out of an airliner in 1971 and vanished. The man, also known as D.B. Cooper, boarded a Northwest flight in Portland for Seattle on Nov. 24, 1971, and commandeered the plane, claiming he had dynamite.

In Seattle, he demanded and got $200,000 and four parachutes and demanded to be flown to Mexico. Somewhere over southwestern Washington, he jumped out the plane's rear exit with two chutes.

The FBI said that while Cooper was originally thought to have been an experienced jumper, it has since concluded that was wrong and that he almost certainly didn't survive the jump in the dark and rain. He hadn't specified a route for the plane to fly and had no way of knowing where he was when he went out the exit.

"Diving into the wilderness without a plan, without the right equipment, in such terrible conditions, he probably never even got his chute open," agent Larry Carr said. He also didn't notice that his reserve chute was intended only for training and was sewn shut.

Several people have claimed to be Cooper but were dismissed. In 1980, a boy walking near the Columbia River found $5,800 of the stolen money.

"Maybe a hydrologist can use the latest technology to trace the $5,800 in ransom money found in 1980 to where Cooper landed upstream," Carr said. "Or maybe someone just remembers that odd uncle." (info from The Associated Press)
Posted by Michael N. Marcus at 2:27 AM