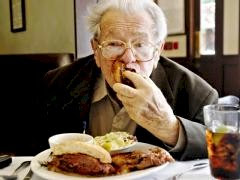 Eddie "Bozo" Miller, who was once listed by the Guinness Book of World Records as the "world's greatest trencherman" (glutton) died Jan. 7 at age 89.

He once won a contest by eating 30 pounds of elk and moose meatloaf. He boasted of downing 25 bowls of minestrone and 30 pounds of shrimp, and drinking a whole bottle of gin in a single chug on a bet, then offering to buy the loser a drink. His Guinness records -- in categories no longer recorded in the book -- were for eating 27 two-pound pullets of chicken, and for downing 324 raviolis, each at single sittings in 1963. Guinness noted that he downed the first 250 raviolis in 70 minutes. There was a delay while the restaurant restocked.

Miller in his prime was a jolly ball of a man, 5 feet 7 inches tall and 57 inches at the waist, making him, wrote one of his many friends in the press, almost as easy to walk over as to walk around. He was born to San Francisco vaudevillians and eventually became one of Oakland's most prominent men about town, driving a bright-yellow Cadillac with boxes of perfume and pearls in the trunk as presents for the ladies.

He had as many as 11 meals a day and 25,000 calories. Rejecting a few smaller creatures -- rabbit, duck, snails -- he chewed a mighty swath through the East Bay. And he boasted of seldom suffering indigestion, except once, in 1942, when a snack of 10 pounds of cheese crackers made him ill. He said he often sank a dozen martinis before his first lunch of the day.

"His hobby was getting people drunk," says Steve Blackman, his son-in-law. Weekly dinners at his home that he held for guests, often including Hollywood royalty, challenged each diner to ingest ludicrous quantities of cuisine cooked by the host. After dinner, his three daughters -- Candy, Cooky, and Honey -- would present a selection of more than 100 liqueurs. On the wall was a framed slogan from his hero, W.C. Fields: "Nothing exceeds like excess." Mr. Miller's other tastes tended to the extreme as well. He boasted that he owned 10,000 records.

A competitive spirit drove him, he said. Too often in periods when he tried to diet, someone would challenge his gustatory supremacy and he would suddenly find himself downing 25 7-Ups or three steaks. "A friend will say, 'Hey Boz, eat a jar of white horseradish for my wife,'" he told the Los Angeles Times in 1972. "I can't say no."

Miller liked to imagine that he would have outeaten Diamond Jim Brady (1856-1917), the Gilded Age financier and gourmand. "I understand he was strong, mighty strong in the meat department," Miller told the Fresno Beein 1944. "But he was vulnerable in pastry. Me, I have no weaknesses."

He likewise regretted not being in his prime to take on Takeru Kobayashi, the terror of the Coney Island boardwalk who has dominated hot-dog-eating contests in recent years. "He said he would have ate him under the table," recalls Blackman.

George Shea, chairman of the International Federation of Competitive Eating, says the organization will have a moment of silence to honor Mr. Miller at its Nathan's Famous Hot Dog Eating Contest in Coney Island this July 4.

After owning and managing bars in the 1940s, Miller became a liquor distributor. By the late 1970s, the advice of his latest doctors (previous ones predeceased him, he declared) and the death of a daughter began to limit his hunger. He slimmed down to about 175 pounds from more than 300 at his peak.

Sometimes suspected of stretching the truth about his achievements as a gurgitator, he habitually exaggerated his age by a decade. Although he wasn't quite into his nineties, as he claimed, it was still no mean feat for him to sit down with an Oakland Tribune reporter last month to take on a French-dip sandwich. Miller complained of having no appetite and quipped of his funeral, "They're going to stuff me." (info from The Wall Street Journal, photo from NBC11.com)
Posted by Michael N. Marcus at 3:51 AM