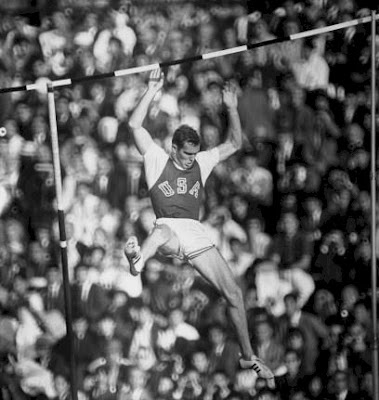 In an event that had seen the world record advance less than six inches, to the 16-foot level, over the previous 20 years, and only then after aluminum poles had replaced bamboo ones, John Thomas Pennel was in the vanguard of a group of pioneering athletes who transformed the sport in the early 1960's.

Their weapon was the new fiberglass pole, and their impact on the sport was decisive.

In one five-month span in 1963, Pennel, a senior at Northeast Louisiana State, personally added more than nine inches to the record, beginning with a 16-foot-3-inch vault at the Memphis Relays on March 23 and culminating with his benchmark-shattering vault of 17 feet, 3/4 inches at the Gold Coast meet at the University of Miami on Aug. 24.

His stunning series of achievements in 1963 made Pennel, who won the year's Sullivan Award as the nation's top amateur athlete, a favorite to win the gold medal at the 1964 Olympics in Tokyo, but a back injury six weeks before the Games cost him a chance for Olympic glory. He finished 11th, with a height of 15-5, as his American teammate, Fred Hansen, set an Olympic record with a vault of 16-8 3/4.

Two years later, with Seagren now his main rival, Pennel was again a favorite win an Olympic gold, but he was knocked out of the competition in Mexico City and relegated to a fifth-place finish when his pole fell under the bar on a vault of 17-8 1/2 that would have clinched a bronze medal and kept him in competition for the gold, which was captured by Seagren.

The next year, Pennel set his eighth and last world record, 17-10 1/4, more than a foot and a half above his original mark. A series of injuries led him to end his career in 1970, the year Christos Papanicolaou of Greece became the first man to clear 18 feet.

Pennel later worked in sports marketing for Adidas and others, and made television commercials. He died in 1993 at age 53, from cancer. (photo from Viewimages, info from The New York Times)
Posted by Michael N. Marcus at 5:31 AM