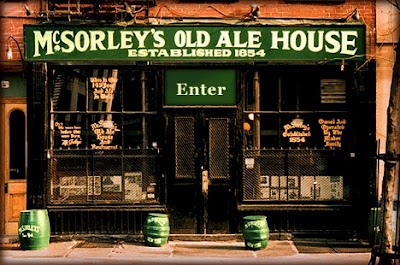 In 1970, Barbara Shaum was the first woman to step into McSorley's Old Ale House in Manhattan, a legendary East Village fixture dating from the 19th century, on the day a new city law forced it to admit women for the first time.

Renowned as a men-only bastion with sawdust covered floors and well-worn furnishings, and a target of those fighting the exclusion of women, the saloon succumbed to an ordinance that banned discrimination against women in all public places in the city.

Shaum's leather-goods shop was then two doors down from McSorley's, and she was friendly with its staff even though she was active in the women's movement. The bar's manager invited her to be the first woman through its doors, soon after the law ended the men-only policy. She entered just ahead of another local shopkeeper, Sara Penn.

The forced end of the bar's men-only policy was really "a small thing" for women, Ms. Shaum said. "Equal pay is more important." (info from The New York Times)
Posted by Michael N. Marcus at 3:46 AM