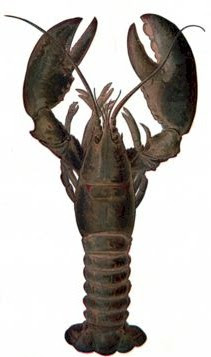 During a fall harvest festival in 31,827BC, a 22-year-old caveman named Fnork killed, cooked and ate a lobster he found crawling on a beach in southern France.

Before that meal, lobsters were considered to be spawn of the devil (and high in cholesterol), and many people praised Fnork as the bravest man in the world.

According to interpretations of a cave painting, Fnork ate the lobster boiled, with melted butter and mashed turnips. Fnork's lobster bib was made of goat hide, and he used a goat's femur bone to crack the claws. Fnork said the boiled lobster was OK, but he wanted to try it stuffed with crabmeat in the future.
Posted by Michael N. Marcus at 9:04 AM