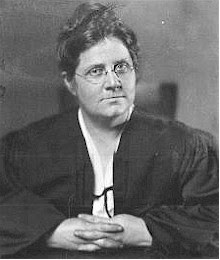 Florence Ellinwood Allen (1884 - 1966) majored in music at Western Reserve University, then studied piano in Berlin while also working as a music journalist. After a nerve injury ended her music career, she returned to Cleveland to work as a music critic and a teacher.

Later, law became her main interest, and she received a Master of Arts in political science and constitutional law.

Rejected by Western Reserve's law school because of her sex, Allen attended the University of Chicago and New York University. After receiving her law degree, she was admitted to the Ohio bar in 1914, and successfully defended women's municipal voting before the Ohio Supreme Court.

President Roosevelt appointed her as Judge of the United States 6th Circuit Court of Appeals in 1934. Later Roosevelt and Eisenhower both considered her for a Supreme Court appointment, but apparently the time wasn't right. In 1958, Allen became chief judge of the 6th Circuit, making her the first woman chief judge of a federal court. (info from The Encyclopedia of Cleveland History)