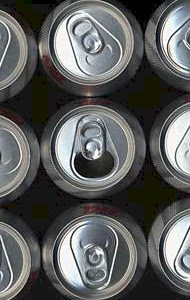 Metal cans have been used for storing foods and drinks since 1810. The first tin cans were so thick they had to be hammered open. As cans became thinner, it became possible to invent dedicated can openers, and dozens of different types were developed and sold.

All of the openers had a fundamental problem: they're useless if they're still in the kitchen while the thirsty people are in a park, stadium or boat.

In 1959, Ermal Fraze was at a picnic in Ohio, and had forgotten an opener for the canned beverages. He improvised an opener, and started thinking of ways to eliminate the need for a can opener in the future. Others had tried to make a can with a built-in opener, but they didn't work well.

Fraze concentrated on a lever attached to a rivet at the center of the top of a round can. Fraze’s first version used a lever that pierced a hole in the can but resulted in sharp, sometimes dangerous edges. Later he created the familiar pull-tab version, which had a ring attached at the rivet for pulling, and which would come off completely. He received a patent in 1963 and sold it to Alcoa.

Iron City Beer was the first drink to use the pop-top can design, and its sales zoomed. Other beverage companies became interested, and by 1965, nearly 75 percent of U.S. breweries were using them.

In the mid-1970's, outcry from environmentalists led to the design of cans with non-removable tabs, created first by the Continental Can Co. (info from MIT and about.com; photo from Texas A&M)
Posted by Michael N. Marcus at 10:39 PM