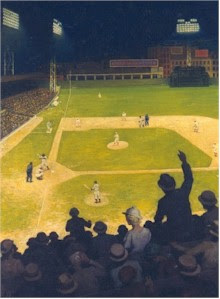 Although there were a number of earlier minor league nighttime baseball games, the first major league game under the lights was at Crosley Field in Cincinnati, Ohio, on May 24, 1935. The home team Reds beat the Philadelphia Phillies, 2 to 1.

According to Time Magazine, these were objections to night games:

(1) In eastern cities it is not pitch dark until after 9PM most of the summer. Because teams must warm up before starting and because lights are useless except in pitch dark, games will not start till 9:30, and will end near midnight, too late for most fans.

(2) Every team would have to spend some of the increased revenue from night games to pay for two teams, one for days and one for nights. Once they were used to one set of conditions, players could not switch from one team to the other.

(3) Old-time managers, opposed to change on principle, dislike the experiment. Of 16 managers, only two were slightly interested.
Posted by Michael N. Marcus at 6:28 PM