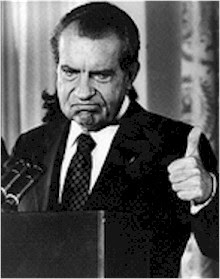 President George W. Bush was named the worst president in the last 61 years by American voters -- with nearly twice the negative rating of Richard Nixon -- in a poll released by Quinnipiac University on Jun 1.
Bush was named by 34 percent of voters, followed by Richard Nixon at 17 percent and Bill Clinton at 16 percent, according to the poll. Leading the list for best President since 1945 is Ronald Reagan with 28 percent, followed by Clinton with 25 percent.
President Bush was ranked worst by 56 percent of Democrats, 35 percent of independent voters and 7 percent of Republicans, the University poll found. Best ranking for Reagan comes from 56 percent of Republicans, 7 percent of Democrats and 25 percent of independent voters. Among voters 18 - 29 years old, Clinton leads the "best" list with 40 percent.
"Democrats just plain don't like President Bush. His father, the 41st President, was voted out of the White House after one term. Nixon quit under fire. But most Democrats think Bush 43 wins the worst-president race," said Maurice Carroll, Director of the Quinnipiac University Polling Institute.
"Kennedy and Truman get big Democratic votes, especially among Baby Boomers (45 - 64 years old) and seniors (over 65), but recent memory counts," Carroll said. "Democrats say Clinton's the best and Republicans say he's the worst. Republicans don't think much of Jimmy Carter either. There's no contest for the GOP favorite: It's the Gipper."
Posted by Michael N. Marcus at 6:52 PM