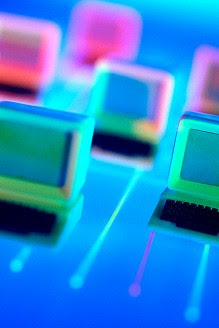 In the Cold War 1960s, Washington was worried that a nuclear attack would disrupt communications and hinder the Pentagon's ability to fight back. The Department of Defense started a project to develop survivable communications.

The Department's agency that dealt with futuristic research was (and is) ARPA, the Advanced Research Projects Agency. It was interested in survivable communications and in computer networking, and created the ARPAnet, the precursor to the Internet.

Originally linking four universities, the ARPAnet came online in 1969. One major difficulty was getting computers from different makers and using different operating systems to communicate. This led to the now-standard TCP/IP communication protocols.

Today, information is transmitted through networks, as it was in those early days. It's broken up into small packets, which are sent via whichever route is least busy, and reassembled at the destination. Information can successfully pass through a damaged network and needs no centralized control, providing the survivability that the Pentagon wanted.

The ARPAnet very quickly spread to other computer research facilities. In 1971, an email program was created, and in 1972, the @-symbol began designating where someone was 'at'.

The ARPAnet was extremely successful at a secondary goal: increased communication among researchers. Emailing lists took off on a wide variety of topics, and were not limited to computer science. One of the earliest and busiest lists was for sci-fi fans.

Soon universities who did not have Pentagon research contracts realized the need to have a similar network and CSNET was born. Commercial service providers such as AOL, Prodigy and Compuserve soon followed, and the boom was on. When adoption of http (hypertext transmission protocols) created the World Wide Web, the Internet was fully formed.

When the original ARPAnet was finally shut down in 1990, the Internet was so widespread that its end was barely noticed. (info from WiseGeek)


If you want to learn more about the early days of the Internet, I strongly recommend Where Wizards Stay Up Late: The Origins Of The Internet by Katie Hafner
Posted by Michael N. Marcus at 5:49 AM

Awesome post. Do you mind if I ask what your source is for this information?