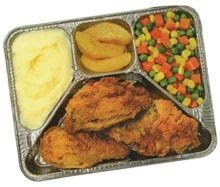 TV Brand Frozen Dinner was developed in 1953 for C.A. Swanson & Sons. TV Dinner eventually became a generic term for any frozen meal purchased in a supermarket and heated at home.

The original TV Dinner came in an aluminum tray inside a flat cardboard box, and was heated in an oven. Most frozen food trays are now made of microwaveable material. The first TV Dinner was turkey with cornbread dressing, peas and sweet potatoes.

The entire dinner, which sold for 98 cents, could be removed from the outer packaging as a unit, and heated directly in the oven (25 minutes at 425°F) without a pan; and the meal could be eaten out of the same tray, without a plate.

The aluminum tray had rounded edges like a TV screen, and it fit nicely on a TV snack table, for someone watching TV; so the name was constantly reinforced. Swanson planned to sell 5,000 dinners during the first year, but ended up selling more than 10 million. (info from Wikipedia)
Posted by Michael N. Marcus at 7:26 PM