1904:
patent for electric plug and outlet 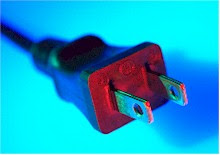 While watching through a window as a janitor cleaned behind some electrically-operated games in a penny arcade, Connecticut inventor Harvey Hubbell noted the tedious process required for disconnecting and reconnecting wires in order to move the equipment away from the wall.

The exasperated janitor had to detach each of the power supply wires from separate post terminals extending outward from the wall. After moving the games aside and sweeping the floor, the janitor then had to identify each wire and its proper terminal post, make each of the reconnections, and check them to avoid short circuits.

Hubbell got the idea to design a device with individual wires attached, allowing the user to easily connect and disconnect a game. He built three prototypes, which the janitor tested.

Later, Hubbell's "separable plug" design took shape on the drawing board, and was submitted to the patent office. Additional designs -- separable plugs in different configurations, a flush-mounted receptacle, cartridge fuses and fuse block, lamp holders, and sockets -- soon followed. (info from Hubbell, Inc.)
Posted by Michael N. Marcus at 3:38 AM