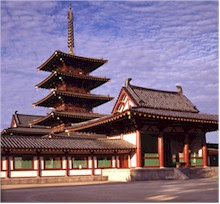 Japanese construction company Kongo Gumi, which was founded in 578 by a family from the ancient Korean kingdom of Baekje, went into liquidation in January 2006.

The company started when carpenter Shigemitsu Kongo built the Shitennoji Temple in Osaka. Kongo had been invited to Japan by Prince Shotoku, a great Japanese cultural hero, who at the age of 16 brought about the adoption of Buddhism in the country.

Shigemitsu Kongo's descendants continuously maintained the family business, and the firm was named the world’s oldest company by the Economist magazine. The firm has been a symbol of “shinise,” Japan's family business culture.

In addition to the Shitennoji Temple, Kongo Gumi built the Horyuji Temple in Nara. Both are important examples of early Japanese architecture.

Due to heavy debts and a severe drop in the value of land Kongo Gumi had purchased in 1980s, the company decided to liquidate; and operation of the company was transferred to the Takamatsu Corporation. With the retirement of Masakazu Kongo, Kongo Gumi's firm’s 40th president, 1,400 years of history as a family firm came to an end.(info from Chosun and other sources; photo from Osaka COnvention & Tourism Bureau))
Posted by Michael N. Marcus at 5:26 AM