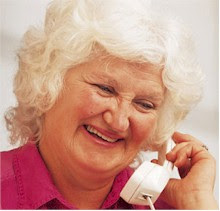 In the 1990s, AT&T (the real one, not the current one that used to be called SBC) wanted to sell phone gear to long distance companies like MCI and Sprint, who competed with AT&T. These companies were reluctant to spend money that would enrich their enemy, so AT&T split apart in 1996, and the new phone equipment operation was named Lucent Technologies.

In the mid-1980s, more than 30 million people were renting phones. Prior to the sale to North Street, Lucent spokesman Bill Price told me that 2.6 million people were renting 3.5 million telephones. By mid-2004, only about 970,000 households rented a phone, according to the Associated Press. Most phones now rent for $5-$10 per month, and some of them have been generating rental revenue for 40 years.

Most renters are poor, uneducated, elderly, or all three. The youngest phone renter is Louella Belle Firestone of Hope, Arkansas. She's 73, and will probably pay rent for another 12 years.
Posted by Michael N. Marcus at 7:00 AM