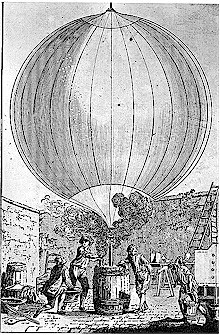 French Brothers Joseph and Jacques Montgolfier were paper makers who observed that smoke tended to rise, and that paper bags placed over a fire expanded and also rose. They concluded that if they could capture what they thought was a unique gas inside a lightweight bag, the bag would rise.

Their original test balloon was made of paper and linen and open at the bottom. When flaming paper was held near the opening, the bag, called a balon, slowly expanded with the hot air and floated upward.

The brothers tested balloons of various sizes that rose as high as 600 feet. They built a large cloth and paper balloon about 33 feet in diameter that rose over 6,500 feet above the marketplace in Annonay on June 4, 1783.

On September 19 in Versailles, the Montgolfiers flew the first passengers in a basket suspended below a hot-air balloon: a sheep, a rooster and a duck. The flight, which lasted eight minutes, took place in front of about about 130,000 people, including Louis XVI, Marie Antoinette, and the French court. The balloon flew nearly 2 miles before returning the animals safely to earth.

The next major milestone occurred on October 15, when the brothers constructed a tethered hot-air balloon that rose 84 feet and flew for nearly four minutes with human passengers.

On November 21, two men made a free ascent in a balloon and flew from the center of Paris to a suburb, going about 5.5 miles in 25 minutes. (info and illustration from the US Centennial of Flight Commission)
Posted by Michael N. Marcus at 9:27 AM