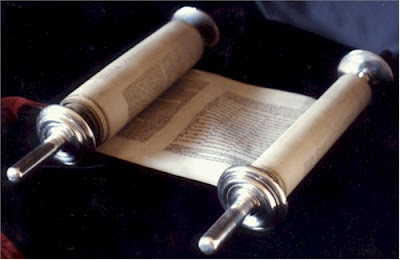 Jen Taylor Friedman made history this year when she became the first female scribe ever to complete a Torah scroll. The Torah comprises the first five books of the Hebrew Bible, known as the Old Testament of the Christian Bible. To Jews, there is no "Old Testament," and the books that Christians call the New Testament are not part of Judaism. Jews have revered the Torah through the ages, as have Samaritans and Christians. It is traditionally accepted as the literal word of God as told to Moses.

The Torah was unveiled September 9 at New York's Drisha Institute for Jewish Education, an Orthodox feminist stronghold, before being transported to the United Hebrew Congregation, the St. Louis Reform synagogue that commissioned the Torah.

Taylor Friedman, 27, is among just a few known female Jewish scribes in the world. She's said, however, that she wasn't trying to make a feminist statement in making the scroll ― she simply wanted to write a Torah.

Torahs are written using a painstakingly careful methodology by highly qualified scribes, resulting in modern copies of the text that are unchanged from millennia old copies. The reason for such care is it is believed that every word, or marking, has divine meaning, and that not one part may be inadvertently changed lest it lead to error.

Written entirely in Hebrew, a Torah contains 304,805 letters, all of which must be duplicated precisely by a trained sofer (“scribe”), which may take as long as 18 months. Any error during inscription renders the Torah invalid. According to the Talmud (the oral law of the Jewish People), all scrolls must also be written on special parchment. Some Torahs have survived intact for over 800 years.

The parchment on which the Torah scroll is written, the hair or sinew with which the panels of parchment are sewn together, and the quill pen with which the text is written, all must come from "kosher" animals. A scribe may never use tools of "base metals," because they are associated with implements of war.

A completed Torah will often be “dressed” externally with ornamental breastplates, scrolls, protective fine fabric, and sometimes a crown, often made of silver. This is not to worship it, but to mark it as sacred and holy, as the living word of God.

In modern times, some scribes are paid to complete a Torah under contract on behalf of a community or by individuals to mark a special occasion. Because of the work involved, they can cost tens of thousands of dollars to produce.

The text of the Torah can also be found in books, which are mass-printed in the usual way for individual use, often containing both the Hebrew text and a translation into another language. (info from the Forward & Wikipedia)
Posted by Michael N. Marcus at 2:15 AM