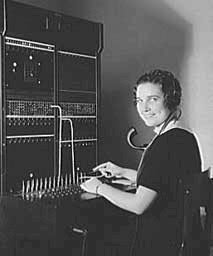 For much of the 20th century, women played an important role in telecommunications system of the United States. As telephone operators, they helped customers make long distance calls, provided information, and made sure the whole system worked smoothly.

Although remembered primarily as a female profession, the first telephone operators who worked for the Bell System (later known as AT&T) in the 1870s were teenage boys.

Unfortunately the boys frequently proved rude and unruly, so young women, believed to be naturally more polite, were hired instead. The first female telephone operator was Emma McNutt, who was hired in New York City by a manager who happened to be a neighbor and who thought Emma was a nice girl. Little is known about Emma's career, although she was in the vanguard of women who established telephone operator work as an almost exclusively female job.

On September 1, 1878, Emma became the first woman telephone operator located at the Telephone Dispatch Company in Boston. The early telephone operators were prim and proper, obedient, virtuous and of course, single. (Marriage was not allowed in New England Telephone until 1942.)

In the 1880s and 1890s women telephone operators often served the same small group of customers every day. This created an intimacy between client and customer as customers grew to recognize operators' voices and know them as people. In many areas, operators could be counted on to have all sorts of information, such as the names and addresses of customers, the latest news, weather, sports results, time of day, and gossip.

Operators working in small, remote offices also had to take on most of the technical work, because there was no one else to do it. One operator, Mary Kennedy, who worked in New York City in the late 1870s, said she did every kind of telephone work except climbing a pole. Every Sunday morning, she recalled, "I had to test trunk lines, and report them for repair. Going up into a cupola to splice a cable or adjust a lightning arrester was part of the day's work."

In terms of job demands, as long as the total number of telephone subscribers remained quite low, the work was fairly easy. But as more and more customers signed up, being a telephone operator became a much more hectic job.

In large cities by about 1910, calls were coming in so rapidly that the operators could hardly take their eyes off the switchboards for a second. The telephone companies decided to take action by installing more and more automatic switching equipment. These automatic switches allowed customers with dial telephones (early telephones had no dials) to make connections themselves without operator assistance. Gradually, the need for operators was eliminated for all calls except long distance and collect calls.

Many operators found employment elsewhere, such as running the switchboards in office buildings, but others dropped out of the workforce to become wives or mothers. At the peak in the late 1940s, there were more than 350,000 AT&T operators, 98% of whom were women. But afterward, the introduction of increasingly sophisticated automatic switching reduced the need for operators.

Unions argued that AT&T intentionally created mass "technological unemployment," but the company argued that most of the lost jobs could be accounted for by normal job turnover and retirement, where workers who left their jobs were simply not replaced.

The career of a telephone operator was one of the few technically oriented jobs available to women in the early 20th century, but it was not open to all women. The telephone company decided that because operators were their direct link to the public, they had to project a "positive" image.

Women with foreign accents, for example, were not employed. Even native English speakers were usually given elocution training to make sure their speech matched the image the company wanted to project. Height was also an issue. Because operators had to sit at the company's equipment for long periods of time, women were selected whose height and weight fit within certain narrow boundaries. Most women under five feet tall, for example, were considered too short to be operators in the early 1900s.

As time progressed the company began setting strict rules about what operators could and could not say. This meant the end to their roles as centers of information. Despite all these restrictions, many women working for AT&T stayed on the job for many years, suggesting that they either liked the work or had few alternatives.

Today, there are only about 80,000 telephone operators still with the telephone companies of the US (many more work as operators in office buildings, however, taking calls and forwarding them to the various offices). The remaining telephone company operators work in several large, central installations that serve giant sections of the US. Usually, the tasks of today's operators are limited to providing directory assistance and transferring subscribers to customer service specialists. (Info from IEEE & CWA, photo (not Emma) from Library of Congress)
Posted by Michael N. Marcus at 1:33 AM