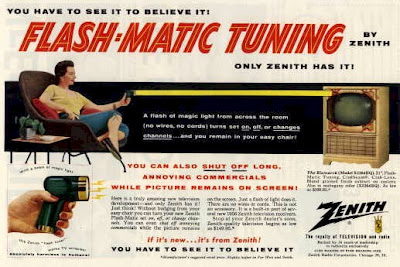 Couch potatoes don’t like to leave the couch to adjust the TV, but remote controls go way back before television.

One of the earliest examples of remote control was developed in 1893 by Nikola Tesla, and described in his patent, Method of an Apparatus for Controlling Mechanism of Moving Vehicle or Vehicles. The first remote-controlled model airplane flew in 1932, and remote control was used for military purposes in WW2.

By the late 1930s, several radio manufacturers offered remote controls for higher-end models. Most of these were connected to the set with wires, but the Philco Mystery Control (1939) was a battery-operated low-frequency radio transmitter, thus making it the first wireless remote control for a consumer electronics device.

One early TV remote control was a small hand-held unit for a 1948 Garod (?) TV set which was called a Telezoom, it enlarged the picture with the press of a button, but did not change channels, or anything else.

The Zenith Radio Corporation created the very first multi-function television remote control in 1950 called Lazy Bone. The Lazy Bone could turn a television on and off, and change channels. However, it was attached to the television by a bulky cable. People did not like the cable because they tripped over it.

Zenith engineer, Eugene Polley created the Flash-matic, the first wireless TV remote in 1955. It used four photocells, one in each corner of the TV screen. The viewer used a directional flashlight to activate the four control functions, which turned the TV on and off, and turned the channel tuner dial clockwise and counter-clockwise. However, sunlight sometimes changed channels at random.

The Space Command transmitter used no batteries; inside the transmitter were four lightweight aluminum rods that emitted high-frequency sounds when struck at one end. Each rod was a different length to create a different sound that controlled a receiver unit built into the television.

The receiver contained a microphone attached to a circuit that was tuned to the same frequency. Some problems with this method were that the receiver could be triggered accidentally by naturally occurring noises, and some people, especially young women, could hear the piercing high-frequency signals. There was even a noted incident in which a toy xylophone changed the channels on these types of TVs since some of the overtones from the xylophone matched the remote's ultrasonic frequency.

The first Space Command units were expensive due to the necessary use of six vacuum tubes in the receiver units that raised the price of a television by thirty percent. In the early 1960s, after the invention of the transistor, remote controls came down in price, and in size. Zenith modified the Space Command remote control with transistor technology (but still using ultrasonics).