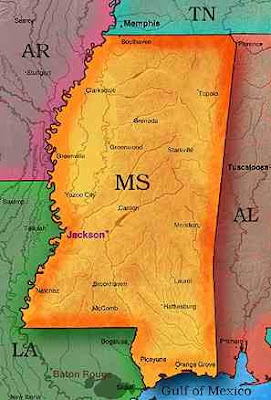 In 1772, slavery was declared illegal in England.

In 1777, slavery was abolished in Vermont.

In 1863, the US Emancipation Proclamation declared that slaves in Confederate-controlled areas should be freed.

In 1865, the US abolished slavery with the 13th Amendment to the Constitution.

Mississippi is also the poorest state in the US; and in 2004, Mississippi was ranked lowest in academic achievement.

OTOH, Mississippi does have good food and good music, and low cost of living.

(info from Wikipedia, map from postcardsfrom.com)
Posted by Michael N. Marcus at 3:52 AM

Not to be a nit-pick, but that's not true.

You need a certain number of states to ratify an amendment, and the number of states was reached. Therefore, every state had to follow that amendment whether they ratified it or not, so slavery was abolished in 1865 by the 13th amendment in mississippi, even though they didn't ratify it.

They did ratify it in 1995 out of guilt for their past actions, but that doesn't mean slavery wasn't officially abolised there until then.


Mississippi is a dumb state with dumb people, though, so it doesn't really matter when they ratified it. ;)

Ratified or not...it was still on the books.....and still probably practiced in the small towns...ever heard of Sugar Ditch, Mississippi?

As to this day there is systematic slavery especially in the Delta. There is inequality in schools etc, housing differen, racial profiling etc. There are loan practices were a certain amount of cash loans are given out and are designed to put people in more debt than they were to begin with etc.