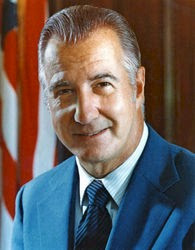 Spiro Theodore Agnew (1918 – 1996) was the 39th Vice President of the US, serving under Nixon, and the 55th Governor of Maryland. He is most famous for resigning in 1973 after being charged with tax evasion.

Agnew's moderate image, immigrant background and success in a traditionally Democratic state made him an attractive running mate for Nixon in 1968. In line with what would later be called Nixon's Southern Strategy, Agnew was selected as a candidate for being sufficiently from the South to attract Southern moderate voters, yet not as identified with the Deep South, which could have turned off Northern centrists.

His vice presidency was the highest-ranking United States political office ever reached by a Greek-American citizen or a Marylander. Agnew's nomination was supported by many conservatives within the Republican Party and by Nixon. A small band of Republican convention delegates started shouting "Spiro Who?" and tried to place George W. Romney's name in nomination. Nixon's wishes prevailed and Agnew went from his first election as County Executive to Vice President in six years — one of the fastest rises in US political history.

Agnew was a protege of Nelson Rockefeller, then governor of New York State and a head of the moderate wing of the Republican Party. Rockefeller was Nixon's chief opponent during the 1968 primary season. Going into the 1968 GOP convention neither Nixon nor Rockefeller had enough votes to clinch the nomination, but Nixon had nearly enough. He invited Rockefeller to his hotel room and proposed that Rockefeller throw his support to Nixon in exchange for naming the Vice Presidential nominee. The only condition was that Rockefeller could not name himself. Rockefeller named Agnew.

Agnew was known for his tough criticisms of political opponents, especially journalists and anti-Vietnam War activists. He was known for attacking his opponents with unusual, often alliterative epithets, some of which were coined by White House speech-writers William Safire and Pat Buchanan, including "nattering nabobs of negativism" (written by Safire), "pusillanimous pussyfooters", and "hopeless, hysterical hypochondriacs of history".

Agnew was Nixon's "hatchet man" when defending the administration on the Vietnam War. Agnew was chosen to make several powerful speeches in which he spoke out against anti-war protesters and media portrayal of the Vietnam War, labeling them "Franco Un-American". Agnew toned down his rhetoric and dropped most of the alliterations after the 1972 election with a view to running for president himself in 1976.

On October 10, 1973, Spiro Agnew became the second Vice President to resign the office.

Unlike John C. Calhoun, who resigned to take a seat in the Senate, Agnew resigned and then pleaded nolo contendere (no contest) to criminal charges of tax evasion and money laundering, part of a negotiated resolution to a scheme wherein he accepted $29,500 in bribes during his tenure as governor of Maryland.

The bribes were paid to Agnew by people in the construction industry to get their projects approved. When Agnew moved from Baltimore to Washington, DC, he continued to demand payments. Angered, the construction men turned government's witnesses. Agnew was fined $10,000 and put on three years' probation.

The $10,000 fine only covered the taxes and interest due on what was "unreported income" from 1967. The plea bargain was later mocked as the "greatest deal since the Lord spared Isaac on the mountaintop" by former Maryland Attorney General Stephen Sachs. Students of Professor John Banzhaf from The George Washington University Law School, collectively known as Banzhaf's Bandits, found four residents of the state of Maryland willing to put their names on a case and sought to have Agnew repay the state $268,482 - the amount he was known to have taken in bribes.

After two appeals by Agnew, he finally resigned himself to the matter and a check for $268,482 was turned over to Maryland state Treasurer William James in early 1983. As a result of his nolo contendere plea, Agnew was later disbarred by the State of Maryland. Like most jurisdictions, Maryland lawyers are automatically disbarred after being convicted of a felony, and a nolo contendere plea exposes the defendant to the same penalties as a guilty plea.

His resignation triggered the first use of the 25th Amendment to the US Constitution, as the vacancy prompted the appointment and confirmation of Gerald Ford, House Minority Leader, as his successor. It remains one of only two times that the amendment has been employed to fill a Vice Presidential vacancy. The other time was when Ford, after becoming President, chose Nelson Rockefeller to succeed him as Vice President. (info from Wikipedia)
Posted by Michael N. Marcus at 3:21 AM