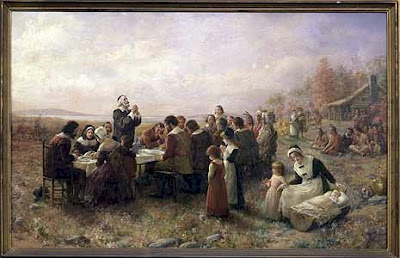 What is regarded in American tradition as the "First Thanksgiving" was actually a harvest festival, without a name. In the spring of 1621, the Pilgrim colonists planted their first crops in Patuxet, Massachussetts. They had limited success with wheat and barley, but their corn crop proved very successful, thanks to Native American Squanto who taught them how to plant corn in hills, using fish as a fertilizer.

In October of 1621, the Pilgrims celebrated their first harvest with feasting, prayers and games, as was the custom in England. The celebration served to boost the morale of the 50 remaining colonists and also to impress their Native allies.

The Pilgrims would not have called the event of 1621 a "Thanksgiving." The Separatist Puritans recognized three kinds of holidays as sanctioned by the Bible: the Sabbath, days of thanksgiving, and fast days.

The religious day of thanksgiving gradually evolved into a yearly Thanksgiving customarily held on a Thursday in November. As America grew and New Englanders moved to new states, the custom of an annual Thanksgiving Day took root throughout the country. The religious holiday added secular overtones, celebrating abundance, family, national unity, and reading the ads for Wal-Mart, Sears and Circuit City.

In 1939, President Franklin Roosevelt moved Thanksgiving from the last Thursday to the third Thursday in November, to extend the Christmas shopping season. In 1941, this unpopular move inspired Congress to permanently fix the date on the fourth Thursday of November.

Thanksgiving has proved one of the most enduring and popular symbols of the Pilgrims. Millions of immigrants who arrived in America between 1880 and 1920 learned "Americanism" from the story of the Pilgrims and their celebration of Thanksgiving. (Painting: The First Thanksgiving at Plymouth by Brownscombe; info from Pilgrim Hall Museum)

Next new posting will be on Monday
Posted by Michael N. Marcus at 2:42 AM