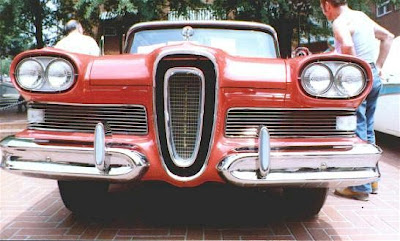 Initial Edsel sales were disappointing. Ford had hoped to sell 200,000 of the 1958 model Edsels, but ended up producing just 68,045. Many people were turned off by the shield, or "horse collar" grille. Designed to be instantly recognizable as an Edsel from a distance of several blocks, the grille was said to resemble a toilet seat, and made the car look like "an Oldsmobile sucking a lemon."

In an effort to boost sales, Ford redesigned the car somewhat and removed several unpopular features for 1959, but again sales were very low. Only 47,396 of the 1959 models were produced.

The 1960 model was released in the fall of 1959, but was basically a 1960 Ford with some sheet metal changes, and did not resemble the earlier models. Only 2,846 of the 1960 models were produced, mainly to fulfill dealer contracts.

Ford decided to discontinue the Edsel in favor of smaller cars that were becoming popular at the time, and on November 19, 1959 announced that it would no longer produce Edsels. (Photo and info from Edsel.net)
Posted by Michael N. Marcus at 5:22 AM