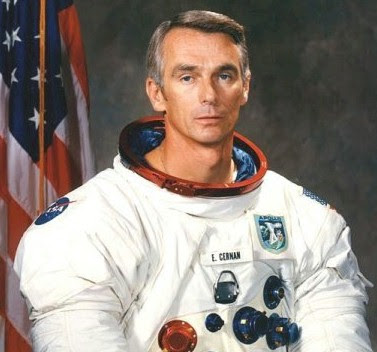 In that final lunar landing mission in 1972, Cernan became "the last man on the moon" since he was the last to re-enter the Apollo Lunar Module during its third and final extra-vehicular activity (EVA).

A native of Chicago, Cernan grew up in the towns of Bellwood and Maywood, IL. He graduated from Purdue University with a B.S. in Electrical Engineering. He was commissioned into the US Navy through the Naval Reserve Officers Training Corps at Purdue, and became a Naval jet flyer. He also holds a M.S. in Aeronautical Engineering from the Naval Postgraduate School. In 1976, Cernan retired both from the Navy (as a Captain) and from NASA, and went into private business.

While on the moon during Apollo 17, he and his crewmate Harrison Schmitt performed three EVAs for a total of about 22 hours of exploration. Their first EVA alone was over three times the length Neil Armstrong and Buzz Aldrin spent outside the LM on Apollo 11. During this time they covered over 35 kilometers using the Lunar Rover and spent a great deal of time collecting geologic samples that would shed light on the moon's early history.

As Cernan got ready to climb the ladder he spoke these words, as of now the last spoken by a human on the moon: "As we leave the Moon at Taurus-Littrow, we leave as we came, and God willing, as we shall return, with peace and hope for all mankind. As I take these last steps from the surface for some time to come, I'd just like to record that America's challenge of today has forged man's destiny of tomorrow. Godspeed the crew of Apollo Seventeen."

Cernan is the author of The Last Man on the Moon, a memoir of his career with NASA and before. CLICK to order the book. (info & photo from Wikipedia)
Posted by Michael N. Marcus at 5:00 AM