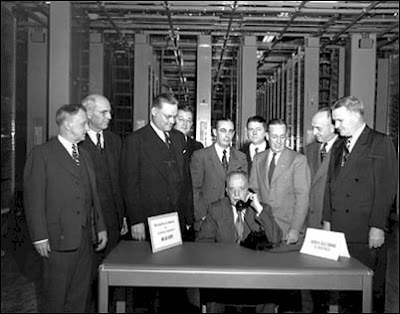 On November 10, 1951, Mayor M. Leslie Downing of Englewood, NJ, picked up a telephone and dialed 10 digits. Eighteen seconds later, he reached Mayor Frank Osborne in Alameda, Calif. The mayors made history as they chatted in the first customer-dialed long-distance call, which introduced area codes.

The inauguration of Direct Distance Dialing eliminated the need for a "number, please" operator, accelerated connection speed, and cut the cost of long-distance calls. While direct-dialing had been available since the 1930s within some small areas, Direct Distance Dialing launched a service that ultimately connected people across North America.

Determined to build a better system, an AT&T engineering team investigated using a single set of short codes to divide North America into unique calling areas. The team concluded that a three-digit code - 2-to-9 as the first digit, the second number always 1 or 0 - produced a set of unique area codes with room for growth. Back then, a local phone number started with an exchange name followed by numbers, such as "Murray Hill 5." Since there were no letters above 1 or 0 on the dial, no phone numbers used a 1 or 0 in the first two pulls of the dial. Thus, equipment could distinguish long distance from local calls.

Ninety area codes in 1951 grew to 135 in 1991. In recent years, cellular phones, fax machines, modems, and local service competition ignited explosive area-code growth. The last code available in the original scheme - 610 - entered service in Pennsylvania in 1994. Codes with second digits other than 0 or 1 came into use. Today, there are over 250 area codes. (info & photo from AT&T)
Posted by Michael N. Marcus at 1:19 AM