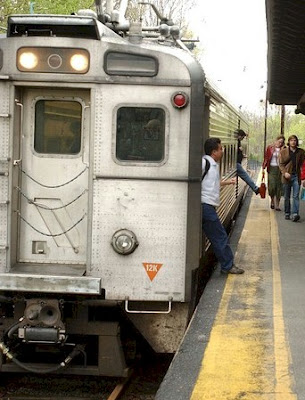 The Great Dinky Robbery was a prank perpetrated by four Princeton University students on Friday, May 3, 1963. "Dinky" is a common term for a small railroad operation; and this Dinky is the Princeton Branch service then operated by the Pennsylvania Railroad, and usually a one-car train. At the time, Princeton was an all-male school, and the Dinky was the primary means of transportation for women coming to the campus.

On that afternoon -- the beginnng of Houseparties weekend -- the Dinky was packed with the usual suited commuters and college women traveling to campus. Suddenly, the engineer spotted a driverless convertible straddling the rails, and braked. From out of the woods appeared a horse at full gallop, its masked rider brandishing a six-shooter. As the train ground to a halt, the engineer threw up his hands.

Three other horsemen appeared, all wearing cowboy garb and bandanas over their faces. They dismounted and boarded the train. “Stay in your seats, everyone!” the leader yelled, firing his pistol with a deafening percussion. Several women screamed. Some men in business suits looked amused, but others fumbled for their billfolds. One held out his gold watch.

The intruders sauntered down the center aisle. “That’s the one I want!” the leader shouted, and he grabbed a young woman in a blue dress. The young man beside her put up a fight, then watched the woman being pulled toward the train door, down the metal stairs toward the horses. The three other cowboys followed, each grabbing a wrist and hauling a primly dressed college woman down the aisle. Outside, the riders and the four abductees struggled onto the backs of the horses and rode into the woods. The convertible already had been removed, and the train lurched forward and slowly resumed its journey to Princeton Station.

When it arrived, the campus platform was swollen with undergraduates expecting their dates. “We were just held up,” a young voice shouted. Word spread. A legend had begun.

The spectacular ploy was carried out by three Cap and Gown seniors – George Bunn ’63, now a respected New York attorney but then a well-known prankster who shared his room with an illegal pet ocelot, broke the then-famous cohabitation rule with impunity, and attacked rival Cottage Club with a bulldozer; Sam Perry ’63; and John Williams ’63. Walt Goodridge ’64, an architecture student and cheerleader, did much of the legwork.

Two of the kidnapped women were undergraduates from Smith College. Randol Foote Haffner recalls sitting with her friend Susie Wolfe that Friday when Goodridge, Bunn, and Perry explained the plan and recruited them. A couple of men were planted on the train with the women. Goodridge rented horses from a stable, and a group with the costumes and guns met the riders in the woods. A team was assigned to drive the convertible onto the tracks and then off.

Haffner remembers: “George came into the car with his gun drawn and looked at me and yelled, ‘There’s the one I want!’ My date and I faked a little protest, but allowed him to pull me off the train and onto his horse. Suddenly I was on the back of this wild man’s saddle, hanging on for dear life.”

After robbing the train, the horsemen, each with a woman rider, headed toward campus. “The horses were really into it,” Goodridge recalls. “Mine wanted to gallop, and you have to remember that none of us was an experienced horseman. When we got near Brown Hall, I remember all the freshmen coming out and cheering us as we passed. That’s when my horse rose up on his hind legs, like in a Western.” Bunn rode up the Colonial Club walkway and onto the porch. The other three riders headed over to Cap and Gown, where Bo Diddley was playing out front. Bo and his musicians seemed amused.

It was approaching dark when the horsemen rode back to the stable. The horses were overdue. “The stable owner was furious,” remembers Williams, a retired president of the Cincinnati Chamber of Commerce. “He had no idea that his horses had just taken part in the creation of a legend.”

The train robbery on that spring afternoon would never be tolerated today. But no disciplinary action was taken against the perpetrators. In the simpler life of 1963, a well-executed prank was a tour de force, a source of admiration and campus awe, a way of tweaking the nose of staid tradition and yet staying within it.

Although no actual robbery was committed (the only "items" stolen being the four women), the hold-up of the train was probably the last such event in America. Before 1960, the last train robbery in America took place in Oregon in 1923. (info from Wikipedia and Princeton.edu (Selden Edwards ’63), photo by Ben Amster for the Daily Princetonian)
Posted by Michael N. Marcus at 2:35 AM