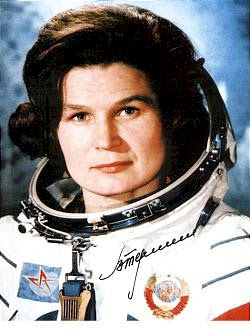 Valentina Tereshkova, born in 1937, was the first woman in space. In 1963, she spent three days in space and orbited the earth 48 times.

Valentina was the youngest of three children. Her father was killed when she was two years old. As a child she had to help her mother with farm chores and she didn’t attend school until she was ten years old. Eventually they left the farm and went to live in the city, where her mother worked in a cotton mill. At 17 she started working in factories. She finished her schooling by correspondence course, and graduated from the Light Industry Technical School.

She became a full member of the communist party, and joined an amateur parachuting club and became an expert parachutist.

When Yuri Gagarin, the first astronaut, went into space, her mother said that next time a woman should go. Valentina was inspired.

Every person in the Soviet Union was entitled to apply to the space program. Valentina applied and was accepted. Her parachuting experience helped her get in, along with three other women. The Soviets wanted to send a woman to space, just once, to see if they could endure the hardships as well as men. In order to become a cosmonaut she had to join the Air Force as an Officer.

She began her training in 1961 and it took 18 months. She had to spend hours studying technical manuals, rocket science and spaceship design. She also underwent strenuous physical training.

On June 16, 1963, as a Junior Lieutenant and chief pilot of the Vostok VI, she became the first ever woman to go into space. She orbited Earth 48 times, and parachuted out of the spacecraft following its reentry into Earth’s atmosphere. She had proven that women could withstand the physical and emotional stresses of space flight as well as any man.

She was awarded a medal at the Kremlin three days later and proclaimed as a Hero of the Soviet Union. She never returned to space, but worked in the Space Program and married another Cosmonaut in 1963. One year later their daughter, Elena, was born. She was the first child to be born to parents who had both been to space. Doctors were a little worried that she would not be normal, but Elena, now a doctor, proved them wrong.

She worked for the Communist party and headed the Soviet Union’s International Cultural and Friendship Union from 1987 to 1991. She also worked tirelessly for the Soviet feminist movement, but she said that a woman’s most important job is to be caring and a mother. (info from Online Learning Haven, photo from Moscow Times)
Posted by Michael N. Marcus at 4:30 AM