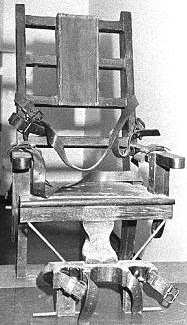 Alfred P. Southwick developed the idea of using electric current as a method of execution after having witnessed an intoxicated man die after having touched an exposed terminal on a live generator.

The first practical electric chair was made by Harold P. Brown, an employee of Thomas Edison, hired to research electrocution and develop the electric chair.

Brown's design was based on George Westinghouse's alternating current (AC), which was then just emerging as the rival to Edison's less transport-efficient direct current (DC), which was further along in commercial development. The decision to use AC was entirely driven by Edison's attempt to claim that AC was more lethal than DC.

In 1886 New York State established a committee to determine a new, more humane system of execution to replace hanging. Neither Edison nor Westinghouse wanted their electrical system to be chosen because they feared that consumers would not want in their homes the same type of electricity used to kill criminals.

In order to prove that AC electricity was dangerous and therefore better for executions, Brown and Edison, who promoted DC electricity, publicly killed many animals with AC, including a circus elephant. They held executions of animals for the press in order to ensure that AC current was associated with electrocution. It was at these events that the term "electrocution" was coined. Edison introduced the verb "to westinghouse" for denoting the art of executing persons with AC current. Most of their experiments were conducted at Edison's West Orange, New Jersey, laboratory in 1888.

The demonstrations apparently had their intended effects, and the AC electric chair was adopted by the committee in 1889. The first person to be executed via the electric chair was William Kemmler in New York's Auburn Prison in 1890; the 'state electrician' was Edwin Davis. The Westinghouse company refused to sell an AC generator for the purpose of execution, so Edison and Brown used subterfuge in order to acquire the AC generator. They pretended that the Westinghouse AC generator was for use in a university.

In 1900, Charles Justice was a prison inmate at the Ohio State Penitentiary in Columbus. While performing cleaning detail duties in the death chamber, he devised an idea to improve the efficiency of the restraints on the electric chair. Justice designed metal clamps to replace the leather straps, thus allowing for the inmate to be secured more tautly and minimize the problem of burnt flesh. These revisions were incorporated into the chair and Justice was subsequently paroled from prison. Ironically, he was convicted in a robbery/murder and returned to prison 13 years later under a death sentence. On November 9, 1911, he died in the same electric chair that he had helped to improve.

A record was set on July 13, 1928 when seven men were executed, one after another, in the electric chair at Kentucky State Penitentiary in Eddyville. In 1942, six Germans convicted of espionage in the Quirin Case were put to death in the District of Columbia jail electric chair.

The last person who involuntarily was executed via the electric chair was Lynda Lyon Block on May 10, 2002 in Alabama.

A number of states still allow the condemned person to choose between electrocution and lethal injection. In all, seven inmates nationwide, 4 in Virginia, 2 in South Carolina and 1 in Arkansas have opted for electrocution over lethal injection. The last use of the chair (as of 2006) was on July 20, 2006, when Brandon Hedrick was electrocuted in Virginia. He elected this method. Before that, it had not been used since May 2004, when James Neil Tucker was electrocuted in South Carolina. He refused to choose his execution method. (Info from Wikipedia, photo from New Jersey State Police Museum)
Posted by Michael N. Marcus at 4:54 AM