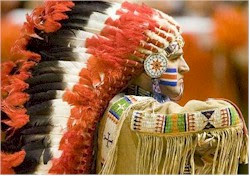 After 20 years of pressure from activists who found their symbol offensive, the University of Illinois at Urbana-Champaign has decided to do away with Chief Illiniwek and his dance, after Illinois played Michigan in the final home game of the season.

The school's decision led the NCAA to lift sanctions that had barred Illinois from hosting postseason sports since 2005. The NCAA had deemed Illiniwek -- portrayed since 1926 by students who danced at home football and basketball games in buckskin regalia -- was an offensive use of American Indian imagery
.
But, in the eyes of orange-clad students who waited outside in chilly weather for hours ahead of the game, the decision robbed the school of a piece of its history. Jonathan Bluenke said Chief Illiniwek will be missed most on the football field, where Illini fans haven't had much to cheer about the past few years. ''If we were down by like 30, people stuck around for the chief,'' said Bluenke, who sat with another student in the cold shadow of Assembly Hall. ''Honestly, that's like what you hear in the stands.''

As Chief Illiniwek took the floor for the last time, a video montage of chiefs past played above the court. After the halftime dance, hundreds in arena shed their orange Illini shirts to reveal black shirts worn underneath, mourning the loss of the chief.

''To me the chief is spirit,'' said Paul Bruns, a retiree who worked for the university for 38 years. ''Why did (American Indians) dance? They danced for spirit.'' (from the Chicago Sun-Times)
Posted by Michael N. Marcus at 4:47 AM