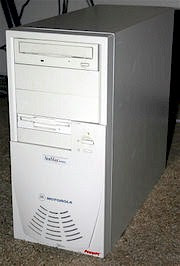 Despite its overwhelming success with the iPod and iTunes, Apple has never achieved a big share of the personal computer market. According to some industry observers, this is because the company refused to license its technology to other companies, who could have built Mac-like machines, increasing ownership of Mac-compatibles, which would have stimulated software development and growth of the Mac market.

There was a brief period in the late 1990s, when Apple did permit Mac cloning, and it became an $800 million business, with computers made by Motorola, Power Computing and others, based on Motorola and IBM chips.

Apple execs said that Mac compatibles didn't boost the market -- they only took business from Apple.

Apple canceled the program in 1998, leading to low closeout prices on Motorola and Power Computing clones that ironically hurt Apple even more.

The top Mac clonemaker, Power Computing, spent heavily to build up production, and grabbed 9.5% of the Mac market. Low on cash, Power planned an initial public offering, but couldn’t proceed because of uncertainty over arrangements with Apple. Power halted construction of a $25 million headquarters in Texas, and its president, former Dell Computer marketing wiz Joel Kocher, quit abruptly after directors rejected his plan to fight Apple in court and in the market with a price war. (info from Business Week & Cnet)
Posted by Michael N. Marcus at 5:17 AM

Apple made a big turn by putting Intel chips in their units. Now that you can install Windows natively on a Mac, Macs are back better then ever, even Apple haters (as I once was) are like hmmmmm ok they are cute and useful now. I'll get one.