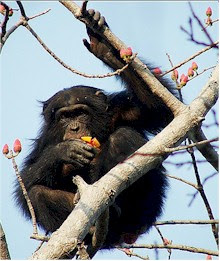 Chimpanzees living in the West African savannah have been observed fashioning deadly spears from sticks and using the tools to hunt small mammals -- the first routine production of deadly weapons ever observed in animals other than humans.

The multistep spearmaking practice, documented by researchers in Senegal who spent years gaining the chimp' trust, adds credence to the idea that human forebears made weapons millions of years ago.

Reserachers from a National Geographic-sponsored study discovered that chimps know how to use tools as weapons to hunt smaller mammels, a trait before now that scientists thought was only done by humans.

The landmark observation also supports the long-debated proposition that females -- the main makers and users of spears among the Senegalese chimps -- tend to be the innovators and creative problem solvers in primate culture.

Using their hands and teeth, the chimpanzees were repeatedly seen tearing the side branches off long, straight sticks, peeling back the bark and sharpening one end. Then, grasping the weapons in a "power grip," they jabbed them into tree-branch hollows where bush babies -- small, monkeylike mammals -- sleep during the day.

In one case, after repeated stabs, a chimpanzee removed the injured or dead animal and ate it, the researchers reported in yesterday's online issue of the journal Current Biology.

"It was really alarming how forceful it was," said lead researcher Jill D. Pruetz of Iowa State University, adding that it reminded her of the murderous shower scene in the Alfred Hitchcock movie "Psycho." "It was kind of scary."

The new observations are "stunning," said Craig Stanford, a primatologist and professor of anthropology at the University of Southern California. "Really fashioning a weapon to get food -- I'd say that's a first for any nonhuman animal."

Scientists have documented tool use among chimpanzees for decades, but the tools have been simple and used to extract food rather than to kill it. Some chimpanzees slide thin sticks or leaf blades into termite mounds, for example, to fish for the crawling morsels. Others crumple leaves and use them as sponges to sop drinking water from tree hollows.

But while a few chimpanzees have been observed throwing rocks -- perhaps with the goal of knocking prey unconscious, but perhaps simply as an expression of excitement -- and a few others have been known to swing simple clubs, only people have been known to craft tools expressly to hunt prey.

Pruetz and Paco Bertolani of the University of Cambridge made the observations near Kedougou in southeastern Senegal. Unlike other chimpanzee sites currently under study, which are forested, this site is mostly open savannah. That environment is very much like the one in which early humans evolved and is different enough from other sites to expect differences in chimpanzee behaviors.

Pruetz recalled the first time she saw a member of the 35-member troop trimming leaves and side branches off a branch it had broken off a tree.

"I just knew right away that she was making a tool," Pruetz said, adding that she suspected -- with some horror -- what it was for. But in that instance she was unable to follow the chimpanzee to see what she did with it. Eventually the researchers documented 22 instances of spearmaking and use, two-thirds of them involving females. (from the Washington Post. Photo by Paco Bertolani)