1891:
beginning of the end for telephone operators 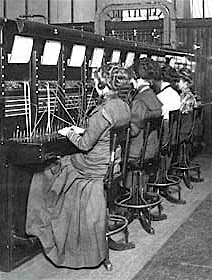 The patent consists of:

1. A device for use by the customer, creating trains of on-off electric pulses corresponding to the digits 0-9. This equipment originally consisted of two telegraph keys, and evolved into the rotary dial telephone.
2. A stepping switch at the telephone exchange. A rotating arm steps over, in a semi-circular fashion, 10 possible contact points. The stepping motion was controlled by the power pulses coming from the originating customer's telegraph keys, and later from the rotary dial.

Cascading enabled connection among more than 100 customers. Additional switches can be positioned vertically and horizontally to increase the switching capacity.

The almost unlimited potential for expansion gave the Strowger system a big advantage. Previous systems had a fixed number of subscribers to be switched directly to each other in a mesh arrangement. This became geometrically more complex as new customers were added, as each new customer needed a switch to connect to every other customer. In modern terminology, the previous systems were not scalable.

The Strowger Automatic Telephone Exchange Company was formed, and it opened its first exchange in La Porte, Indiana in 1892, with about 75 subscribers. It took the Bell Telephone System a long time to become convinced that electronics made more sense than humans for completing local calls, and Bell finally licensed Stroger's technology in 1924.

Strowger sold his patents for $1,800 in 1896, and they were resold for $2.5 million in 1916. In 1898, he got $10,000 for his share in the Automatic Electric Company, which later became GTE, which became part of Verizon. (Photo shows operators at the Roseburg Telephone and Telegraph Co. circa 1910, from Douglas County OR Museum) (Info from Wikipedia & other sources)
Posted by Michael N. Marcus at 6:44 AM