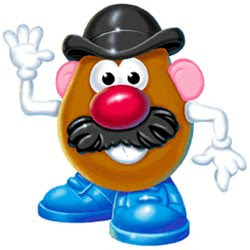 Mr. Potato Head started as a breakfast cereal premium, developed by New York inventor George Lerner. Just before 1950, he designed and produced a first generation set of plastic face pieces with pins that could be pushed into fruits or vegetables to transform the food into an endless array of playmates.

The toy wasn't successful. There was still a World War 2 mentality to conserve resources. Toy companies didn't think that customers would accept the idea of wasting a piece of food as a child's toy. But after awhile, George finally sold the toy to a company that planned to use the pieces as a giveaway in cereal boxes.

George thought that his new toy deserved a bigger opportunity, and it came from Hasbro, a New England toy manufacturer.

Henry and Merrill Hassenfeld were the second generation of brothers to run their family’s business. Although their roots were in textiles, they also enjoyed success making pencil boxes with surplus book binding fabric. They soon found that the boxes sold better when they were filled with pencils and other school supplies. Merrill experimented with filling the boxes with small toys instead of school supplies, and the idea took off. They began making their boxes into doctor kits, nurse kits, paint sets and even junior air raid kits.

In 1951, George Lerner approached Merrill with a set of toy face pieces as an idea to fill one of their boxes. Merrill loved the idea of making funny faces with fruits and vegetables, and bought the toy from the cereal company. It became their first huge toy hit, and made Hasbro a powerful toy brand.

Mr. Potato Head was the first toy to be advertised on television.

The original Mr. Potato Head contained only parts, such as eyes, ears, noses and mouths, and parents had to supply children with real potatoes for face-changing fun! Eight years later, a hard plastic potato "body" was included with Mr. Potato Head to replace the need for a real potato. Over the next three decades, a variety of Mr. Potato Head products were sold. He was so loved by children, that he was expanded into additional toy categories including puzzles, creative play sets, and electronic hand-held, board and video games. The vast popularity of Mr. Potato Head also attracted non-toy companies who licensed his image and name to make apparel, accessories and novelty items.

In 1985, he received four write-in votes in the mayoral election in Boise, Idaho. Mr. Potato Head's appeal to people young and old made him the ideal ambassador for many causes and good-will efforts. In 1987, Mr. Potato Head surrendered his signature pipe to the U.S. Surgeon General, C. Everett Koop, and became the "spokespud" for the American Cancer Society's annual "Great American Smokeout" campaign -- a role he carried out for several years. On his 40th birthday, it was decided that he would no longer be a "couch potato" and he received a special award from the President's Council for Physical Fitness, right on the lawn of the White House! Always one to pass on a wholesome message to the public, he and Mrs. Potato Head joined up with the League of Women's Voters in 1996 to help out with their "Get Out the Vote" campaign and spread the word about the importance of voting to Americans.

Mr. Potato Head's celebrity status carried him to Hollywood in 1995, where he played a supporting role in Disney's "Toy Story." And, in 1997, Burger King hired him to be the spokespud for the introduction of their new french fry and "Try the Fry" campaign. In the fall of 1998, he starred in his own Saturday morning children's television program, "The Mr. Potato Head Show," on the Fox Children's Network. (info from Hasbro, mrpotatohead.net, and About.com)
Posted by Michael N. Marcus at 4:33 AM