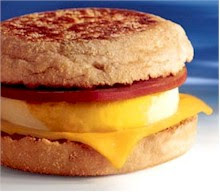 People have been eating breakfast sandwiches (lox on a bagel, egg on a roll) for a very long time. But the notion of a portable morning meal that could be eaten from one hand while the other hand clutches the steering wheel, really took off in 1973, when McDonald's introduced the Egg McMuffin. It also put McDonalds into the breakfast business.

Egg McMuffin is a slice of Canadian bacon (which doesn't have to come from Canada any more than French Fries must be imported from France), a grilled egg, and a slice of cheese on an English muffin. A Sausage McMuffin with Egg is a popular variation that uses a sausage patty in place of the Canadian bacon. In the UK, the McMuffin is available without bacon for vegetarians. People order a "Bacon Egg McMuffin" to get the equivalent of the US version.

Former McDonald's President Ray Kroc wrote that Herb Peterson, the operator of their Santa Barbara franchise, asked him to look at something, not telling him what it was because it was "...a crazy idea, a breakfast sandwich. It consisted of an egg that had been formed in a Teflon circle with the yolk broken, and was dressed with a slice of cheese and a slice of grilled Canadian bacon. It was served open-faced on a toasted and buttered English muffin."

Peterson believed that to launch an entirely new food line, such as breakfast, McDonald's needed something unique and yet something that could be eaten like all other McDonald's items -- with the fingers. His solution came when he started modifying an Eggs Benedict sandwich that was being marketed by Jack-in-the-Box.

By Christmas of 1971, Peterson had been working on the product for months. He had experimented with prepackaged Hollandaise, which he rejected as too runny. He replaced it instead with a slice of cheese, which when melted on a hot egg produced the consistency he was looking for. He also had to develop a foolproof way of preparing an egg on a grill to give it the appearance of a poached egg. Poaching eggs did not fit with McDonald's assembly line production process, but Peterson solved the problem by developing a new cooking utensil -- a cluster of six Teflon-coated metal rings -- that was placed on the grill to give eggs a round shape to match an English muffin. When he added grilled Canadian bacon, Peterson had a breakfast product perfect for a sandwich-oriented fast-food chain.

In 1971, Kroc was celebrating Christmas at his ranch near Santa Barbara, and Peterson asked him to stop by the store.

Peterson was ready with a demonstration of his new product, and a flip-chart to explain its economics; but it was taste, not economics that convinced Kroc. He had just finished lunch before seeing Peterson, but he devoured two of the new sandwiches anyway. At Kroc's request, Peterson took his Teflon rings to Chicago to prepare his new breakfast for the rest of McDonald's senior managers, all of whom responded as positively as Kroc had.

McDonald's was ready to test the product nationwide, as soon as it settled on a name. Peterson favored calling it McDonald's Fast Break Breakfast, but the name had been copyrighted, but never used, by Nabisco. One evening, Mr. and Mrs. Kroc were having dinner with McDonald's exec Fred Turner and his wife Patty. Patty Turner suggested calling it the Egg McMuffin, and the name stuck.

EggMcMuffin has 300 calories, the fewest of any McDonalds breakfast item. (info and some direct quotes from MCDONALD'S: BEHIND THE ARCHES by John F. Love, Wikipedia, & other sources).
Posted by Michael N. Marcus at 4:38 AM