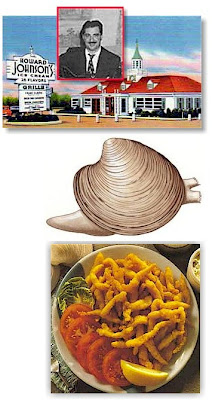 Many people think that clam strips are cut away from the yucky parts of "whole belly" soft shell clams, that are commonly used for steaming or frying. Clam strips are actually slices of the "foot" of large sea clams. They can be up to nine inches in diameter, and are found from the shoreline to about 120 feet down.
Although people have been eating clams for centuries, fried clam strips have only been around for about 75 years.
Thomas Soffron, a clam digger and businessman from Ipswich, Mass., invented the clam strip, and was the first to market it. Soffron was a finicky eater, and when served steamed clams, he wouldn't eat the neck and he wouldn't eat the belly -- he just ate a sanitized strip.
Soffron later dug some hard shell clams, and tried slicing the digging foot of the clam into eighth-inch strips and fried them. He liked the sweet taste and thought he discovered a food with broad appeal, that could travel better than the soft-shell clams that were dug closer to shore. Tom Soffron and his brothers went into business in 1932 to market clam strips to people who had never eaten clams before. The business took off when they met another young entrepreneur named Howard Johnson, in the 1940s.
Johnson was opening roadside restaurants in New England. The brothers tried to sell him their clam strips. He tasted, smiled, and a deal was done. At that time, few people outside of Ipswich even knew clam strips existed.
When the Soffron Brothers and Howard Johnson's joined forces, the timing was perfect for both to realize tremendous growth and success. Right after World War II, the country was building the interstate highway system and Howard Johnson's would eventually create hotels and restaurants from coast to coast (sadly, there are only about five left now), and the "Tendersweet Fried Clams" became a nationwide favorite. The Soffrons once operated seven processing plants, from Maryland to Nova Scotia.
Soffron was born in Kalamata, Greece. When he was an infant, his family immigrated to the United States and eventually settled on a farm in Ipswich. During the Great Depression, Soffron moved to New York City and worked in hotel restaurants. In 1938, he returned to Ipswich and started digging clams.
Soffron was also the lead singer and guitarist with Talambekos Mandolinata, a string band that performed at Greek social events in New England and New York in the 1940s and '50s, and also made commercial recordings. Soffron died on Feb. 21, 2004 at age 96 in Ipswich, his hometown.
(Lots more about clams at WeLoveClams.com)
Posted by Michael N. Marcus at 5:41 AM