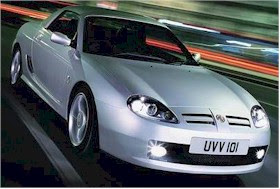 Nanjing Automobile Group unveiled its made-in-China MG sports cars and sedans Tuesday, the first step in its plans to use the iconic British brand as a platform for global expansion.

China's oldest car maker introduced the MG TF roadster and the MG 7295 and 7275 sedans at its $450 million plant near Nanjing city. It has renamed the brand "Ming Jue" or "Modern Gentleman" to represent grace and style for the Chinese consumer. Ten thousand tons of assembly line equipment were shipped from England to China.

MG's new owner plans to invest $2 billion in the brand, including opening British and US plants. "MG, as an established brand worldwide, will help Nanjing Auto attract customers' attention," said Huang Zherui, an analyst who advises carmakers in China.

Companies in China, a country with more than $1 trillion in foreign reserves, have bought overseas rivals to gain technologies and brands that will help them expand globally. Lenovo Group bought IBM's PC unit in 2005. TCL bought the German television maker, Schneider Electronics in 2002.

Nanjing Auto bought the MG brand and other assets in 2005, after the collapse of the British automaker MG Rover Group. SAIC Motor, a General Motors and Volkswagen partner in CHina, bought the design rights for two MG Rover models and K-series engines.

Nanjing plans to build MG TF roadster convertibles at a former MG factory in England for sale in Europe this year. They had planned to make MG TF Coupes in Oklahoma next year (but that now seems unlikely), and sell the roadster, coupe and sedan in the US.

The first MG car was built at Morris Garages in England in the 1920s. The automaker built a series of two-seater roadsters including the T-Series, the MGA and the MGB, an icon of the 1960s and 1970s. The company was absorbed into British Motor in 1952, the start of a series of mergers involving the British car industry. The brand ended up as part of MG Rover, which collapsed in 2005.

China's economic growth has averaged about 10 percent for the past four years, making cars affordable to more people. Vehicle sales rose 25 percent last year to 7.22 million, as China surpassed Japan as the world's biggest auto market behind the United States. (info from The International Herald Tribune and NPR, photo from MotorAuthority)
Posted by Michael N. Marcus at 4:29 AM