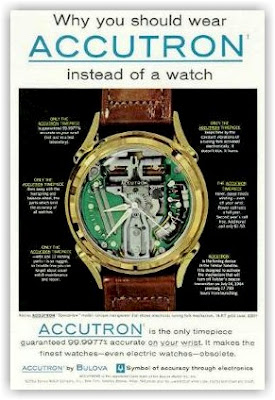 The Accutron 214 was declared the American "Gift of State" by President Linden Johnson and given to hundreds of visiting dignitaries. The 214 was made into panel mount clocks and installed in the instrument panels of thousands of military ships and aircraft including "Air Force One". The 214 can reasonably be considered the prototype for all modern quartz watches. No other timepiece has had a greater impact on the way we keep time today. (info from Finer Times, Bulova, Wikipedia, Accutron214)
Posted by Michael N. Marcus at 4:49 AM