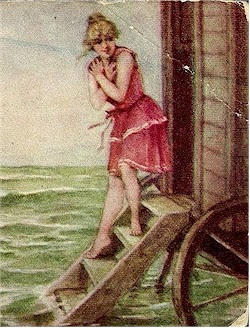 In the 19th century, especially in Britain, men and women who swam in the ocean were usually segregated into separate areas, so that no one of the opposite sex might catch sight of them in their bathing suits, which (although extremely modest by more modern standards) were not considered proper clothing to be seen in by the general public.

The bathing machine was a device, popular in the 19th century, which was intended to allow people to wade in the ocean at beaches without violating Victorian notions of modesty. Bathing machines were roofed and walled wooden carts which would be rolled into the sea.

The bathing machine was part of sea-bathing etiquette which was more rigorously enforced upon women than men, but was expected to be observed by people of both sexes among those who wished to be considered "proper".

People would enter the bathing machine while it was on the dry beach, wearing street clothes. In the privacy of the machine they would then change into their bathing suit, placing their street clothes into a compartment where it would remain dry.

Once in the water, the occupants would use steps to exit the machine out the sea side. It was considered essential that the machine block any view of the bather from the shore.

Some resorts employed a person called a "dipper," a large strong person of the same sex as the bather who would assist the bather getting into and out of the sea. Some dippers were said to roughly push the bathers into the water, then yank them out; but this was considered part of the ocean bathing experience. Bathing machines would often be equipped with a flag which could be raised by the bather as a signal that she was ready to return to shore.

According to some sources, the bathing machine was first developed about 1750 by Benjamin Beale at the resort town of Margate. However, in the Scarborough Public Library there is an engraving dated 1736 which shows people bathing and appears to be the first recorded evidence for the use of bathing machines.

Bathing machines were most common in the United Kingdom and parts of the British Empire with a sizable British population, but were also used at beaches in some other nations, including the US. Legal segregation of bathing areas in Britain ended in 1901, and use of the bathing machine declined fairly rapidly thereafter. By the start of the 1920s bathing machines were almost extinct. (Info from Wikipedia)
Posted by Michael N. Marcus at 4:00 AM