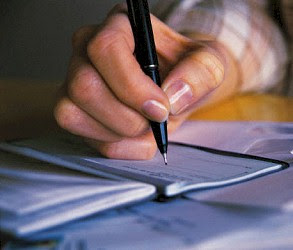 Weinberg's $83.78 check was used to pay for a dozen eggs and a quart of orange juice in a Piggly-Wiggly supermarket. Weinberg said, "Like most shoppers, I usually pay with a finger scan, but I still had a checkbook, and wanted to have a chance to do something that might get me in the history books."

Since the 1980s, credit cards, debit cards and payments by phone and online, gradually replaced paper checks. The Federal Reserve estimated that fewer than one million checks were written in the US in 2030, compared with about 10 billion in 2015, 37 billion in 2003, and 50 billion in 1995.

By 2010, credit card and debit card retail transactions started being replaced by Radio Frequency Identification (RFID) implants. In 2025, "plastic" credit was made illegal, and was replaced by more secure Point of Purchase Biological Credit Identification ("POP-BCID"), including finger scans, eye scans, and Instant Follicle DNA Analysis. By that time, computers with voiceprint analyzers had become widespread, for access to secure documents, adult websites, and for online purchases.

Old credit cards became collectors' items. One BankAmericard issued in 1962, recently sold for over $35,000 on eBay.

Paper money and coins were removed from circulation in 2030, except for non-spendable gold-colored Federal Commemorative Medallions that could be used as Christmas stocking stuffers, and as gifts for children who lost teeth. The Medallions are sold by the Federal government, to help finance the war in Iraq. Wallets largely disappeared in the early 2030s, when Americans started using Multi-Function IPhones ("MFIPs") that took the place of driver's license, insurance card, Social Security card, draft card, etc.

According to The Associated Press, the decline in check writing prompted the Federal Reserve to dramatically reduce the size of its check-processing department. From 2003 to 2007, the Fed closed more than half of its 45 check-processing centers. By the end of 2008, only 18 centers remained, and by 2015, there was just one left, in Bangalore, India.

Check writing survived in the US for some specialized tasks, such as real estate transactions, and paying kids to mow the lawn; but became illegal on the first day of 2033, under the Federal Paperwork Reduction Act of 2025. Most other industrialized countries stopped using checks by the mid 2030s, and at this time only Cuba and North Korea still use checks.
Posted by Michael N. Marcus at 4:02 AM