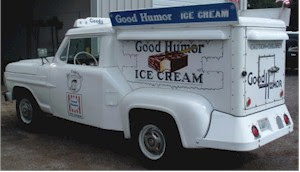 In 1920, Harry Burt, a Youngstown, Ohio candy maker, created a lollypop called the Jolly Boy Sucker. That same year, while working in his ice cream parlor, Burt created a smooth chocolate coating that was compatible with ice cream. It tasted great, but the new combination was too messy to eat. Burt’s son, Harry Jr., suggested freezing wooden lollypop sticks, used for Jolly Boy Suckers, into the ice cream, and it worked.

Burt called his creation the Good Humor bar, capitalizing on the then widely held belief that a person’s humor, (temperament) was related to the humor of the palate (sense of taste). Convinced that he had something big on his hands, he filed for a patent at 3 a.m. on January 30. The patent officials didn't share his sense of urgency. It took three years and a personal trip to Washington, D.C., with a five-gallon pail of Good Humor bars before Burt was finally granted exclusive rights to "ice cream on a stick."

To market his new product, Burt sent out a fleet of 12 chauffeur-driven trucks, all with bells. The Good Humor bar was an immediate success in Youngstown. Customers liked that the ice cream was on a stick, and the Good Humor men in their white uniforms promoted a clean, wholesome, and trustworthy image.

In 1926, after the death of her husband, Cora Burt took the company public with franchises costing just $100. During the next few years as Good Humor expanded into other parts of the Midwest, the Good Humor Corporation of America was formed. It acquired the patents and consolidated the operations of some of the franchised companies.

In 1930, M.J. Meehan, a New York businessman, acquired the national rights to the company by buying 75 percent of the shares. The Meehan family owned the company until 1961 when it was sold to Unilever’s U.S. subsidiary, the Thomas J. Lipton Company.

Unilever’s Lipton Foods unit continued to manufacture and market Good Humor products for the next 12 years. In 1976, when the company's direct-selling business was disbanded in favor of grocery stores and free-standing freezer cabinets, the trucks were parked for the last time. Some of the trucks were purchased by ice cream distributors while others were sold to private individuals.

Photo is from www.GoodHumorTrucks.com. The operator of that website provides trucks and uniformed drivers for corporate events, social affairs and movies in the Chicago area.