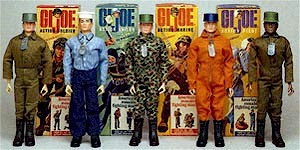 In the early 1960s, toymaker Hasbro wanted to develop a boys' toy that would enjoy the success of their Barbie doll, with millions of kids pestering parents for profitable clothing and accessories.

In February 1964 at the Toy Fair in New York, America was introduced to G.I. JOE: "AMERICA'S MOVABLE FIGHTING MAN." The name G.I. JOE was taken from the movie "The Story Of G.I. JOE" which featured an American army unit in World War II.

G.I. JOE was an incredibly ambitious product release, with 75 different products to support the four basic branches of military - Soldier, Sailor, Marine, and Pilot. Each figure was 11 ½ inches tall, had 21 moving parts and came in fatigue uniform with boots, work cap, and a dog tag. The original G. I. JOE was a slightly more muscular version of Ken, the boyfriend of Barbie. Wary of trying to sell a doll to boys, the company coined the phrase action figure.

Sales the first three years were enormous, and Hasbro aggressively rolled out new products that evolved the line, like the Five Star Jeep, Mercury Space Capsule, Deep Sea Diver, footlocker, Green Beret, and Soldiers of the World. Buoyed by their success, Hasbro even tried a few new products, like the G.I. Nurse. She failed spectacularly, and today remains one of the most sought-after G.I. Joe toys.

In many incarnations across four decades, G.I. JOE has become the single greatest brand in the history of boys' toys, and ushered in a new play pattern that forever changed the scope of the toy world.

G.I. JOE retained his military theme from 1964 until 1968. By the end of the decade, sales were faltering, as they were for all military-themed toys at a time of increased protest against the War in Viet Nam.

In 1969 G.I. JOE retired from military service and became an adventurer. He then explored outer space, the far-flung African deserts and jungles, and the undersea world. An adventure-filled comic book was packed with each set, illustrating several different ways that boys could play with the sets.

Hasbro has kept G.I. JOE on the market nearly continuously since 1964, with the exception of a few years between the “retirement” of the classic “vintage” G.I. Joe in 1976 and the introduction of the new “A Real American Hero” in 1982. \

G.I. JOE has assumed many different faces over the years - from military hero to adventurer to ADVENTURE TEAM member, to SUPER JOE, to the smaller but no less powerful REAL AMERICAN HERO (which itself changed over time), to Sgt. Savage, to G.I. JOE: Extreme, and back to 12” G.I. JOE figures with the Hall of Fame, to 8” Sigma 6, then to the 2 ½” Mission Scale.

There has never been a toy that has had the complex history of G.I. JOE, and there hasn’t been a boy’s toy, aside perhaps from trains, that has lasted as long. In 2004, G.I. JOE was honored with induction into the National Toy Hall of Fame. The collection has proven its longevity, and the adventures of G.I. JOE continue to this day. (Info from Hasbro and CBS, photo from Hasbro.)
Posted by Michael N. Marcus at 4:08 AM