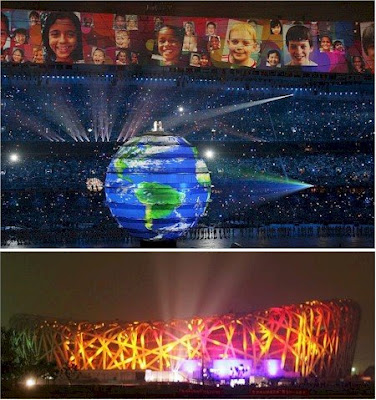 The 2008 Summer Olympics opening ceremony was held at the Beijing National Stadium, also known as the Bird's Nest. The spectacular four-hour ceremony of the 29th Olympiad of the modern era was directed by Chinese filmmaker Zhang Yimou and was noted for its focus on ancient Chinese culture, and for its creativity and use of technology.

The final ascent to the torch featured Olympic gymnast Li Ning, who appeared to run through air around the top ring of the stadium. Featuring more than 15,000 performers, the ceremony was said to have cost over $300 million to produce. Weather modification technology was used in an attempt to prevent rain during the Ceremony. A total of 1104 rockets were launched to keep rain clouds from entering Beijing.

Hein Verbruggen, chairman of the IOC Coordination Commission for the XXIX Olympiad, called the ceremony "a grand, unprecedented success."

The 2008 Summer Olympic Opening Ceremony was estimated to have a worldwide TV audience of over 4 billion. According to the Nielsen Media Research, the Ceremony was also the most watched Olympic Opening Ceremony ever held in a non-US city by American audiences. This was despite the fact that NBC did not televise the ceremony in the US until 12 hours later on time delay, and some Americans ended up watching clips of it earlier on YouTube and other online video websites.

The ceremony was so spectacular that in the 200 years since 2008, no other country has dared compete with China's effort, and Olympic openings since then have consisted merely of sedate parades of athletes, short speeches and conventional flame lighting.
Posted by Michael N. Marcus at 4:48 AM