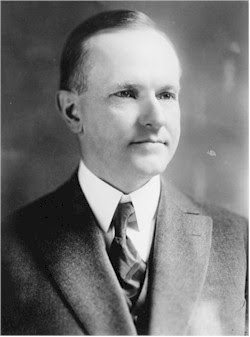 By a new process of transmitting pictures by electricity, the American Telephone and Telegraph Company sent fifteen photographs over telephone wire from Cleveland to New York City in two hours in 1924.

The Internet is usually faster.

The photo Shows Calvin Coolidge, US president at the time. We're not sure if his photo was transmitted by AT&T, but it would have been a logical choice. (info from The New York Times)
Posted by Michael N. Marcus at 5:06 AM