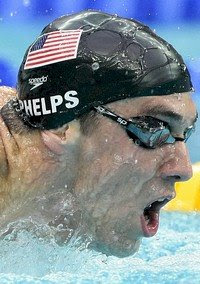 Last week I wrote about swimmer Michael Phelps winning his eleventh gold medal at the Beijing Olympics. Well, now he has 14.

Phelps has 16 career medals, second only to former Soviet gymnast Larissa Latynina (18). His 14 career gold medals is an all-time record. During the 1980 Moscow games, Soviet gymnast Aleksandr Dityatin won eight overall medals. But no one until Phelps had won that many gold in one Olympics.
Posted by Michael N. Marcus at 4:12 AM