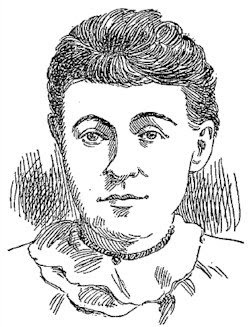 Rachel “Ray” Frank was the first woman student at the Hebrew College in Cincinnati and the first Jewish woman in America to preach formally from a pulpit on Yom Kippur. She delivered the sermon in Spokane, Washington in 1890.

She delivered an opening prayer and paper on "Woman in the Synagogue" at the Jewish Women's Congress, at the Chicago World's Fair in 1893 and was invited to lead a Chicago congregation but declined the offer.

Rachel Frank was the daughter of Leah and Bernard Frank and was born in 1861 in San Francisco. Her parents were liberal Orthodox Jews. Her father was a peddler and an Indian agent, who claimed to be a descendant from the eighth century Jewish sage, the Vilna Gaon.

She graduated from Sacramento High School in 1879 and moved to Ruby Hill, Nevada, where she began to teach school.

She took some courses in philosophy at the University of California-Berkeley and started teaching at the Sabbath School of Oakland’s First Hebrew Congregation. When the rabbi and the principal resigned, she was appointed as the new principal.

She became a correspondent for several newspapers in the San Francisco area. In 1900 she was sent to visit several booming towns in the Northwest area. In one of these towns, she was asked to be the “lady preacher” for the Jewish community.

She started delivering sermons to many Jewish congregations, groups and organizations on the Pacific Coast. She raised many questions about women’s traditional role in the Jewish community and promoted unity of Orthodox and Reform groups.

When the Jewish Women’s Congress was organized in 1893 in Chicago, Rachel Frank was asked to be their spiritual leader. She delivered the opening and closing benedictions and spoke in favor of women’s emancipation.

Rachel Frank and Samuel Litman were married in 1901. He worked as a translator and later took a position at the University of California and Berkeley teaching marketing and merchandising.

Rachel Frank Litman died in 1948. She left a legacy of bringing people together and creating an enthusiasm for Judaism. She will be remembered as the “Girl Rabbi of the Golden West” and as the first Jewish woman to deliver a sermon from the pulpit. (info from the New York Times & Florida Atlantic Universities. Illustration from the Times)
Posted by Michael N. Marcus at 5:32 AM