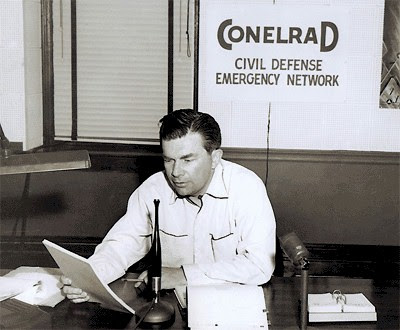 President Truman established the CONELRAD (CONtrol of ELectronic RADiation) system in 1951 to provide emergency information to the public and to prevent Soviet bombers from homing in on their targets by using commercial radio stations as navigation beacons.

Under this first national alerting system, in the event of a Soviet attack on the United States, all commercial radio stations would cease normal operation

Instead, selected CONELRAD stations would broadcast on either 604kHz or 1240kHz to inform the public about emergency measures.

As part of the system it was obligatory for all radios sold after 1953 to have the CONELRAD frequencies of 640 and 1240 kHz marked with small triangles on the dial. The triangles were referred to as CD marks, for Civil Defense. The marks on the radio dial were used to make it easy to find the frequencies.

This requirement was dropped when the CONELRAD system was replaced by the Emergency Broadcast System in 1963 which transmitted bulletins over conventional radio stations.

Additionally, by the early 1960's Soviet missiles had replaced bombers that needed radio stations to locate US targets, and made the CONELRAD system obsolete. (info from The Federation of American Scientists)
Posted by Michael N. Marcus at 5:53 AM