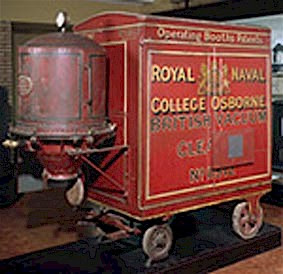 In 1876, Melville Bissell revolutionized home care by making the need for beating carpets less frequent. He owned a china shop in Grand Rapids, Michigan, and made the first popular and successful carpet sweeper by putting rotary brushes in a small canister with a push handle. Bissell's invention was spurred by his own need: bits of packing-crate straw became imbedded in his carpet. The Bissell carpet sweeper picked up both straw and dust and contained them in the canister for later disposal.

On the other side of the Atlantic a British company called Ewbank dominated the market. By 1880, Ewbank sweepers were found in many homes including the palaces of Britain's royal family.

Unfortunately, carpet sweepers lacked vacuum suction. They were effective to a certain point, but could not pull dust and dirt from deep within carpet pile. Inventor Hubert Cecil Booth saw a demonstration in London of an American machine that blew compressed air through carpeting; this produced a cloud of dust (proving how much was trapped inside the carpet), but the same dust only settled back into the carpet.

Americans had also experimented with suction devices since about 1859, but only a few factory cleaners reached the marketplace. Booth saw the future in suction. He proved this to friends in two startling demonstrations. In one, he placed a handkerchief on the carpet and sucked on the handkerchief with his mouth. The underside of the cloth was filled with dirt. Even more startling, Booth was so eager to prove his thinking to friends that he knelt in front of a chair in a restaurant and sucked on the chair covering. Coughing and spluttering, he spat the extracted dirt into a hankie.

Booth’s first vacuum cleaner, called "puffin Billy," was made of a piston pump. It did not contain any brushes; all the cleaning was done by suction through long tubes with nozzles on the ends. It was a large machine, mounted in a horse-drawn van that was pulled through the streets. The vans of the British Vacuum Cleaning Company (BVCC) were bright red, and uniformed operators would haul hose off the van and route it through the windows of a building to reach the rooms inside. Booth was harassed by complaints about the noise of his machines and was fined for frightening horses. The BVCC's most prestigious engagement was cleaning the carpets in Westminster Abbey in London before the 1901 coronation of King Edward VII and Queen Alexandra.

The coronation cleaning led to a demonstration at Buckingham Palace, which had a system installed after the royal family saw the dirt Booth was able to suction out of the palace. Booth's vacuum system, however, was not suitable for individual homeowners. Some large buildings had Booth's machine installed in the basement with a network of tubes fitted into the walls of the rooms with sockets in the walls. Short lengths of tubing with nozzles were connected to the sockets, and this central cleaning system sucked the dust into a container in the basement.

Efforts to make smaller vacuum cleaners were slow to develop. Booth made a smaller version call the Trolley Vac in 1906, but it was very expensive and still weighed 100 lb Other cleaners included the Griffith (also debuting in 1906) and the Davies device, patented in 1909, which required a two-man operating crew, fine for wealthy households but not the average home.

James Spangler, like Bissell, suffered from dust allergy and asthma. In 1907, He built an electric-powered vacuum cleaner in Ohio. Spangler made a box of wood and tin with a broom handle to push it and a pillow case to hold the dust. Spangler's innovation was to connect the motor to a fan disc and a rotating brush, combining the best of Bissell's brush sweeper with the suction of a powered vacuum cleaner to pull more dust out of carpets.

Spangler himself did not have the money to promote the cleaner, but his relative, William H. "Boss" Hoover, a maker of leather goods, quickly saw the advantages of Spangler's machine. The first Hoover vacuum was made in 1908 and weighed only 40 lb. The machines sold very well door-to-door because housekeepers could see the action on their own carpeting. Hoover quickly built a large retailing operation that spread to Britain by 1913; to this day, vacuum cleaning in England is called "hovering." (photo from Ciclomatic, info from About.com)
Posted by Michael N. Marcus at 4:47 AM