1901: Marconi sent a wireless signal across the Atlantic 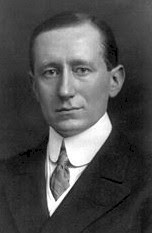 Marchese Guglielmo Marconi (1874 - 1937) was an Italian inventor, best known for his development of a radiotelegraph system, which served as the foundation for the establishment of numerous affiliated companies worldwide. He shared the 1909 Nobel Prize in Physics with Karl Ferdinand Braun, "in recognition of their contributions to the development of wireless telegraphy". Later in life, Marconi was an active Italian Fascist and an apologist for their ideology such as the attack by Italian forces in Ethiopia.

During his early years, Marconi had an interest in science and electricity. One of the scientific developments during this era came from Heinrich Hertz, who, beginning in 1888, demonstrated that one could produce and detect electromagnetic radiation—now generally known as "radio waves", at the time more commonly called "Hertzian waves" or "aetheric waves". Hertz's death in 1894 brought published reviews of his earlier discoveries, and a renewed interest by Marconi.

He studied the subject under Augusto Righi, a University of Bologna physicist who had done research on Hertz's work. Marconi began to conduct experiments, building much of his own equipment in his home in Pontecchio, Italy.

His goal was to use radio waves to create a practical system of "wireless telegraphy" —- the transmission of telegraph messages without connecting wires. This was not a new idea—numerous investigators had been exploring wireless telegraph technologies for over 50 years, but none had proven commercially successful. Marconi did not discover any new and revolutionary principle in his wireless telegraph system, but rather he assembled and improved ideas and adapted them to his system.

In 1899 Marconi sent a signal 32 over the English Channel.

In 1901 Marconi bridged the Atlantic, a feat which caught the world's attention when the Morse Code letter 'S' was transmitted from Poldhu, in Cornwall, England and received by Marconi himself at St. John's, Newfoundland, who recorded the historic event in his pocket book simply "Sigs at 12.20, 1.10 & 2.20".

In the way of development after Marconi's high voltage spark gap came the use of high voltage transformers to generate the spark gap voltage. The ultimate came in the powerful transmitters such as those at the US Navy's station at Arlington, Virginia. Here a 500 Hz generator, a step up transformer, and a rotary spark gap was used used to create the high voltage. Some of these produced a deafening noise created by the spark. Spark transmitters were often placed in acoustically insulated rooms to deaden the sound. (info from Amateur Radio History and Wikipedia
Posted by Michael N. Marcus at 6:04 AM