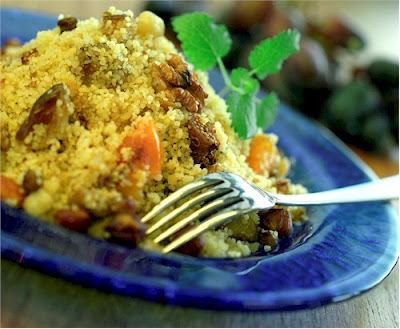 The word fork is derived from the Latin furca, meaning "pitchfork". It is a myth that the table fork was introduced to the West during the Middle Ages, as the ancient Greeks used the fork as a serving utensil. It's also mentioned in the Hebrew Bible, in the Book of I Samuel 2:13 ("The custom of the priests with the people was that when any man offered sacrifice, the priest’s servant came, while the flesh was boiling, with a fork of three teeth in his hand...").

The oldest surviving fork that can be identified with a particular person was discovered along with the "Dead Sea Scrolls" near the ancient settlement of Khirbet Qumran, on the northwest shore of the Dead Sea in Israel 1947. Scientists have dated it to approximately 1000 BCE, the time of King David. A pottery jar that contained the fork, a knife and a bracelet identified their owner as "Eno, son of Amram."

Before the fork was introduced, Westerners were reliant on the spoon and knife as the only eating utensils. People would mostly eat with their hands, using a spoon when needed. Members of the aristocracy would sometimes be accustomed to manners considered more proper and hold two knives at meals and use them both to cut and transfer food to the mouth, using the spoon for soups.

The earliest forks usually had only two tines, but those with numerous tines caught on quickly. The tines on these implements were straight, meaning the fork could only be used for spearing food and not for scooping it. The fork allowed meat to be easily held in place while being cut. The fork also allowed one to spike a piece of meat and shake off any undesired excess of sauce or liquid.

First introduced to Western Europe in the 10th century by Theophanu, Byzantine wife of Emperor Otto II, the table fork had, by the 11th century, made its way to Italy. In Italy, it became quite popular by the 14th century, being commonly used for eating by merchant and upper classes by 1600. It was proper for a guest to arrive with his own fork and spoon enclosed in a box called a cadena. This usage was introduced to the French court with Catherine de' Medici's entourage.

Long after the personal table fork had become commonplace in France, at the supper celebrating the marriage of the duc de Chartres to Louis XIV's natural daughter in 1692, the seating was described in the court memoirs of Saint-Simon: "King James having his Queen on his right hand and the King on his left, and each with their cadenas." In Perrault's contemporaneous fairy tale of La Belle au bois dormant (1697), each of the fairies invited for the christening is presented with a splendid "Fork Holder"

The fork's arrival in northern Europe was more difficult. Its use was first described in English by Thomas Coryat in a volume of writings on his Italian travels (1611), but for many years it was viewed as an unmanly Italian affectation.

Some writers of the Roman Catholic Church disapproved of its use, seeing it as "excessive delicacy": "God in his wisdom has provided man with natural forks — his fingers. Therefore it is an insult to Him to substitute artificial metallic forks for them when eating." It was not until the 18th century that the fork became commonly used in Great Britain. It was around this time that the curved fork used today was developed in Germany. The standard four-tine design became current in the early nineteenth century. (some info from Wikipedia)
Posted by Michael N. Marcus at 6:08 AM

I always inspired by you, your views and way of thinking, again, appreciate for this nice post.