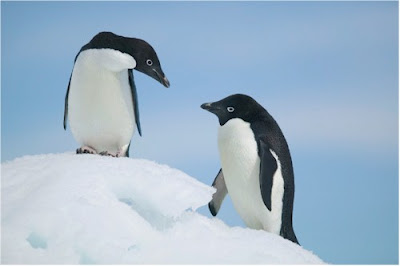 The ancient Greeks first came up with the idea of Antarctica. They knew about the Arctic - named Arktos ("the Bear", from the constellation the great bear) and decided that in order to balance the world, there should be a similar cold Southern landmass that was the same but the opposite ("Ant - Arktos" - opposite The Bear.) They never actually went there, it was just a lucky guess!

In 1773, James Cook crossed the Antarctic circle and circumnavigated Antarctica. Although he did't sight land, deposits of rock seen in icebergs showed that a southern continent exists. He said, "I make bold to declare that the world will derive no benefit from it".

Captain Thaddeus Bellingshausen, a Russian naval officer, was the first to cross the Antarctic circle since Cook. He made the first sighting of the continent, reaching 69° 21'S, 2° 14'W - describing an "icefield covered with small hillocks." on Jan 27, 1820.

This was the first time a continent had truly been "discovered," meaning that there weren't any native people living there who'd known about it for ages. (info from Coolantartica.com)
Posted by Michael N. Marcus at 5:56 AM